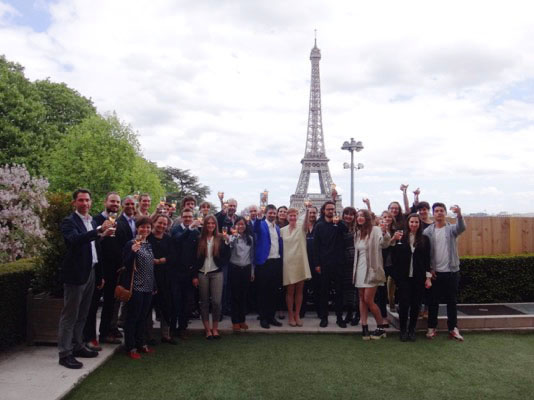 The SDE takes stock of a year’s work.
Despite the roadblocks, driving forward.

On May 9th, 2015, a group of former organisers, faculty advisors & decathletes gathered at the Cité de l’Architecture in Paris. An agreement for the future direction of the Solar Decathlon in Europe was re-energised by establishing the SDE Secretariat and the appointment of its members. Before the Energy Endeavour Foundation, the SDE Secretariat aimed to steward the next steps of the Solar Decathlon movement in Europe.

In 2015, the SDE Secretariat worked with a network of contacts from various european national funding agencies, seeking support at all levels for the Solar Decathlon in Europe. A high level meeting at the European Commission in Brussels in June 2015 resulted in an invitation for the SDE Secretariat to attend the SET-Plan Conference in Luxembourg in September 2015. Representatives of the six nations negotiating support for the SDE (Austria, France, Germany, Hungary, the Netherlands & Spain) were encouraged by the announcement that the SDE would be included in the EU Horizon2020 2016-2017 workplan.

In November 2015, work began at the Bergische University Wuppertal, Germany, to establish a database
of past Solar Decathlon events. Professor Dr. Karsten Voss is leading the project to document, catalogue and disseminate the houses, technologies and stories of past teams’ efforts. To date, this has been the single section of the coordinated workpackages, consolidated at the May 2015 assembly in Paris, to have receive funds from a national funding agency.

In March of 2015, the Horizon2020 tender for the The European Innovation Partnership on Smart Cities & Communities (EIP-SCC) was published. The projected workplan for the SDE Secretariat has been ill-defined in this tender. Despite requests for clarification from the European Commission on this matter, conclusive information is unavailable at this time.

After three highly successful and beneficial Solar Decathlons in Europe (2010, 2012 & 2014), it has been
two years since the last Solar Decathlon in Europe. Given the timing of the upcoming four world-wide
Solar Decathlon competitions (editions in the U.S. scheduled for 2017, China, Latin America & Caribbean and Middle East in 2018), it would be advantageous, if not crucial, for Europe to host an SDE edition in 2019.
The lead time needed to organise a venue & teams requires making the call for cities and the call for teams
this summer, at the very latest. It must be said that without the explicit support of our national,
european and industrial partners, we will miss this window.

Any additional initatives, parallel lobbying and alternative sources of support for the SDE19 are most welcome while the Energy Endeavour Foundation continues on its pursuit for the longevity of the Solar Decathlon in Europe. Please contact SDE Expert Peter Russell at peter.russell@solardecathlon.eu.
The SDE Council of Experts thanks you in advance for your support.