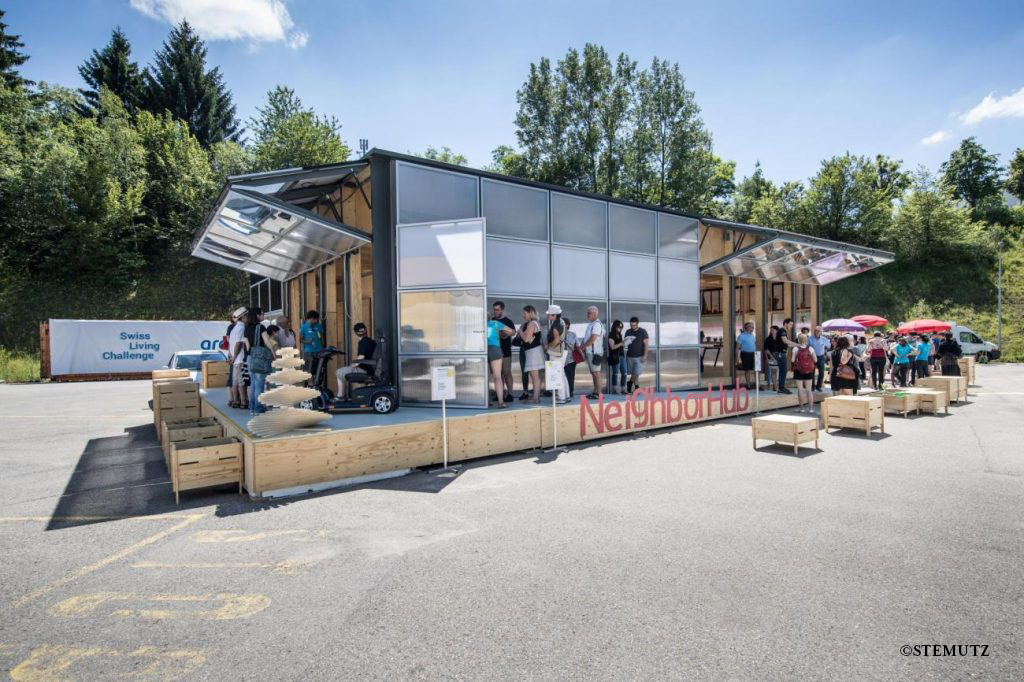 The bar was set sky high from the very start. As soon as the Swiss Living Challenge team set foot in the Solar Decathlon arena when scouting the SDE14 event in Versailles, they knew; they could go the extra mile. And they did. One house for a single family? Why not for a whole community? The Swiss Team thrived, and three years later they won first place during the SD17 competition in Denver, USA. The secret to their success? A big part was the social aspect, which was key to the NeighborHub project.

The Swiss Team’s NeighborHub was immediately identified as an instigator of change. The notion of a communal space where neighbours are inspired toward energy-efficiency & behavioural change was embraced by visitors touring the NeighbourHub at the SD17 event, all in the name of resource-responsibility. In this process of learning by doing, the emphasis on human interaction to incite change reflected the collaborative and integral character of both the Swiss team and the NeighborHub itself. “Innovation is about integration on all sorts of levels,” says former decathlete Florian Meyer. He was part of the Swiss Team’s engineering group and worked on the electrical systems of the house.

It took total dedication and a fundamental joint effort to turn the NeighborHub concept into reality. The Swiss solar house was designed by a total of 250 students and professors from four schools: École Polytechnique Fédérale de Lausanne, the School of Engineering and Architecture of Fribourg, the Geneva School of Art and Design, and the University of Fribourg. “The connection between team members was very strong,” Florian said. Besides the hands-on approach, what drew him to the project was the interdisciplinary spirit of the team: “It was incredible to work with such a diverse team from beginning to end.” In addition, The Swiss Living Challenge team was supported by 150 teaching staff members from industry and academia. Recently, Florian and his former team members joint forces again as the NeighborHub came back to life in April, 2018 at the smart living lab of blueFACTORY in Fribourg, Switzerland. “We built the NeighborHub such that it would be robust to adaptations in various contexts and urban settings,” Florian explains.

He continues, explaining that the NeighborHub might not include the most state-of-the art technologies; however, the ways in which all elements come together are unique, maybe even cutting edge: the Swiss Team worked toward a seamless integral system of technology and design. One of the NeighborHub’s eye-catching features is its vegetated roof, free of solar panels, designed to stimulate biodiversity in urban settings. The roof houses very particular nectar-giving plants that provide sustenance to bees, whose alarming decline in numbers is currently a pressing EU issue. Simultaniously, the roof absorbs rainwater via its plants and gathers it elsewhere for use in certain household appliance such as the washing machine. Wastewater from such appliances is treated in a phyto-purification basin next to the NeighborHub where reeds absorb a large quantity of pollutants out of this wastewater. Purified wastewater can then be infiltrated in the ground, for example, to water other plants. It is a beautiful example of how the Swiss Team aimed to create closed systems to maximise efficiency in and around the NeighborHub.

Instead of placing solar panels on the roof, the Swiss Team ingeniously attached their photovoltaic solar panels to the facades and doors of the NeighborHub. They designed the doors to open vertically like a garage door where the wall rotates towards the exterior and then towards the top. As such, solar panels can adapt their orientation according to the position of the sun, allowing the NeighborHub to capture more energy as the seasons change.

This means that in winter, the external walls remain closed in vertical position to accommodate the solar panels to the lower position of the sun. During the SD17 Competition this characteristic proved itself exeptionally useful when falling snow in Denver had no effect on the effectivity of the NeighborHub’s solar panels. In summer, the external walls remain open and the solar panels are inclined at a 35-degree angle to maximize the high position of the sun. In this configuration, the wall creates a covered terrace that goes all around the house, enabling the NeighborHub to capture solar energy while simultaneously providing shade to the people moving around the house. As such, design and optimal comfort for the community go hand in hand.

As for Florian, he knows the business of making systems and devices communicate with each other to exchange information, and developed the ‘Talk to the NeighborHub’ app. The application monitors and integrates all sorts of technological house data, which is then translated into engaging information that its users can comprehend. “If all lights in the NeighborHub are switched on, the app prompts the question whether it is necessary to keep them on,” Florian explains. The above and many other aspects of the NeighborHub’s design makes the community house an inspiring meeting place for local residents to
co-create solutions for consuming both less and better.

In the coming five years, the NeighborHub opens up room at the smart living lab of Freiburg for a range of activities such as eco-friendly cooking classes with local foods, bike repair workshops, gardening lessons or coworking days and other social gatherings. As such, the NeighborHub carries on as a social hub in Switzerland to work together towards sustainable solutions on energy, water management, biodiversity, waste management, mobility, materials, and food.