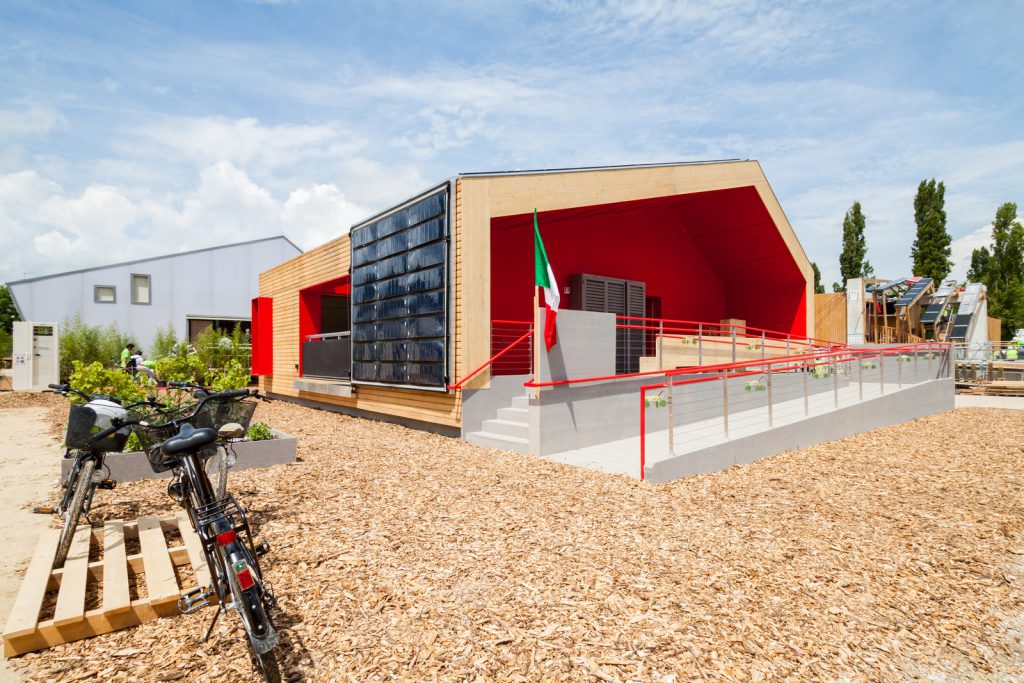 With this in mind, RhOME for denCity, the winning team of the 2014 Solar Decathlon Europe,
integrated some ingenious architectural features & technological innovations into the design
of their energy-efficient house. The 1st place house was showcased at La Cité du Soleil,
the SDE14 solar village in Versailles, France.

Unified by a single idea —to create a home for Rome— a team of 50 architects, engineers, professors, researchers & business experts from the Universitá degli Studi Roma Tre committed to a two-year rollercoaster, embracing the challenge of the SDE competition. Team RhOME positioned their project
with a focus on the suburbs in the context of metropolitan Rome. They encountered startling realities,
such as large, unstructured areas with low-rise constructions & a consistent lack of facilities & services
for Rome’s population.

In their quest to strengthen a sense of belonging for the citizens of Rome, team RhOME understood that restructuring & improving the outskirts of Rome’s metropolitan area requires reinforcement of urban settlements. The team focused on bridging Italian building traditions with clean active energy systems.

Italy is rarely referred to as a leading country in sustainability compared to their north-European neighbours. Team RhOME felt a responsibility to introduce the topics & issues of energy-efficiency
to their city. “Our biggest strength was the combination of architecture & technology.” says RhOME team member Nicola Moscheni. By intertwining both, the team built an efficient machine out of RhOME,
minimizing energy consumption & optimizing personal comfort.

In line with this vision, team RhOME did an excellent job in using typical Mediterranean weather
to their advantage. “In Rome people used to live outside on terraces and loggias.” Nicola explained.
Yet, people needed — & still need— shelter from the heat & sun. So, while large openings in the house
created traditional open spaces, these openings were also strategically located to achieve natural,
cross ventilation for extra comfort.

The building envelope design was another interesting feature to manage intense heat. Imagine the building envelope as the skin of the house that drains heat on warm days & traps warmth on cold days. The team put
a lot of work into its different layers & incorporated several conscious materials  —such as  the characteristic low tech wooden facade— to assure the right insulation for energy saving & efficiency.

RhOME’s ultimate success was the use of 98 Flexible Photovoltaic Panels covering part of the roof & part of the outside wall. They were mounted on micro perforated dark tissue to facilitate the dissipation of heat. Besides being highly efficient & extremely light-weight, the solar panels were also tiltable & slidable,
acting as a solar screen to shade the loggias. “Visitors were very surprised when they saw the panels slide.” says Nicola. This innovative function was a great asset for the flexibility & comfort of the house.

The RhOME house was concieved as a higly efficient system. Team RhOME proved to Italy & to the world that full exploitation of renewable resourses in an urban environment is possible. As such, they revealed the huge potential in new concepts at the intersection of architecture & technology. As the winning team of the SDE 2014 edition, RhOME for denCity challenged the status quo of innovative architecture & looked
beyond the horizon to build the house of the future for the city of Rome.