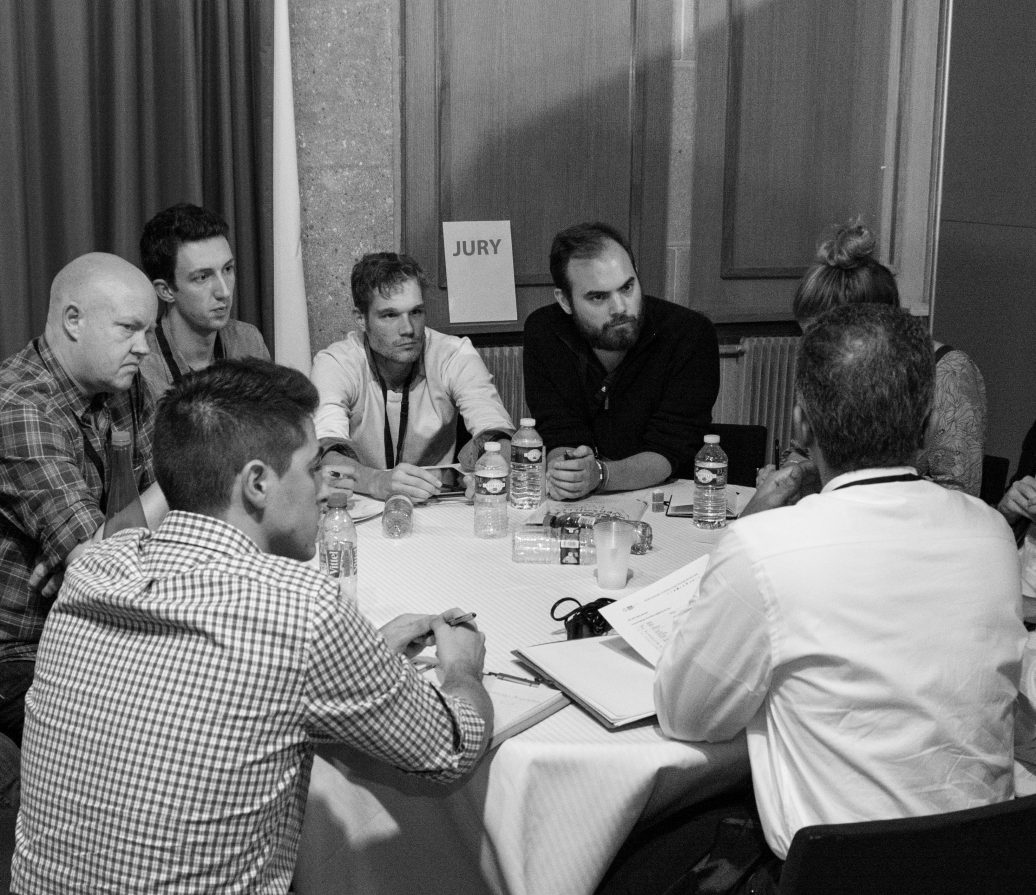 A distinguished jury of experts will gather in Paris on March 21st to designate
the host city for the next Solar Decathlon Europe.

The next host city for the upcoming Solar Decathlon Europe will be determined in the coming days. On March 21st, a jury of respected academics, researchers and professionals from the fields of engineering, architecture, communication, management, marketing, administration & policy will be reviewing full applications from cities wishing to host the much-awaited next edition of the Solar Decathlon Europe. Each jury member has had previous experience with the Solar Decathlon competition.

Marie-Hélène Contal presided over the contest in Communication and Social Awareness during the SDE14
in Versailles.
She is a DPLG architect and a graduate of the Institut d’Etudes Politiques de Paris. In 2014, she was curator of the exhibition ‘Reenchanting the World – Architecture, Cities Transitions’ produced by the Cité de l’Architecture in Paris, France, where she is currently the Director of Cultural Dévelopment and coordinator of the Global Award for Sustainable Architecture. Her work and publications have been celebrated throughout Europe and around the world.. http://www.esa-paris.fr/Conference-Construire-transmettre-2138.html

Gail Hamilton is an award-winning Assistant Professor and former Dean at the American University of Paris, holding a B.S. in Metallurgical Engineering from Purdue University and an MBA from INSEAD. She manages her Paris-based GLHB Group, consulting in the  academic and management development training sectors. She has worked with corporations and entites such as IBM, the Gay Games and consulted the SDE to develop assessment criteria for potential host cities. Gail served on the jury of the branding and communication competition for the Energy Endeavour Foundation. Her recent work focuses on project-based learning experiences for European resource-responsible start-ups in the consumer and construction sectors.
https://glhbgroup.com/about-the-team/gail-hamilton/

Richard King is the founding father of the Solar Decathlon competition, established at the United States Department of Energy. A scientist trained in photovoltaic research, Mr King initiated a forum to champion energy literacy and encourage multi-disciplinary university students to become tomorrow’s change-agents in sustainable living. He created the inspiring Solar Decathlon competition in 2000 and was its director until 2016. He has overseen, guided and stewarded the Solar Decathlon as it has flourished worldwide,
with competitions in Europe, China, Latin America, the Middle East and for the first time on the African continent, Morocco. Mr. King continues to participate on SD competition oversight committees and provides technical assistance to international organizers and event staff.

Pascal Rollet led the Armadillo Box© project in the SDE 2010 and was the faculty advisor of Team Rhône-Alpes, winning the SDE 2012 competition with the Canopea© project. In 2014, Pascal was the director
of the Solar Decathlon Europe in Versailles. He is a full-time Professor of Architecture at École Nationale Supérieure d’Architecture de Grenoble and the Scientific Director of Grands Ateliers in Isle d’Abeau,
a French research center & technical platform dedicated to “learning by doing” & “learning by building”. Lipsky+Rollet Architects, his professional practice in Paris, has been awarded several French prizes including the 2005 Équerre d’Argent. Pascal is a Solar Decathlon Europe Charter Expert.
https://solardecathlon.eu/pascal-rollet_competition-director-pro_motor/

Sergio Vega is a PhD Architect, PMP, specialised in technical risk, quality & project management in building construction. He guided the UPM team behind the Casa Solar of the U.S. Solar Decathlon 2007 and was General Director & Project Manager for the 2010 and 2012 SDE editions in Madrid. Sergio is a professor, researcher and head of the Master’s Programs in Real Estate & Building Risk Management as well as Real Estate & Facility Management. He acted as main researcher of the 10ACTION project, funded by the E.U. as part of the Intelligent Energy Europe Program, and has stewarded many research projects on high energy-efficient buildings and energy retrofitting. Sergio is a Solar Decathlon Europe Charter Expert.  https://solardecathlon.eu/sergio-vega_documentation-director/

Sergio believes: “I had the honour to serve as General Director for the SDE 2010 & 2012 competitions in Madrid. I enthusiastically support all potential cities in their ambition to host the SDE Competition. It is a formidable & gratifying challenge, a unique opportunity to spread knowledge and raise awareness on the necessity to develop a way of life with more sustainable buildings and cities. Hosting a SDE competition is an important initiative, for universities, scientific communities, professionals and the general public. And for sure, the parallel opportunities are huge.”

An expert in environmental public policy, Vincent Jacques le Seigneur is a graduate of the Institute of Political Studies and of the Center for the Development of Journalists. He has worked as a journalist for print media and was Director of the Environmental Press Agency in 1995. In 2000 he was appointed head of the French Institute for the Environment (IFEN), the National Center for Statistics and evaluation of public policies, serving as Chief Executive Officer until 2004. From 2006 to 2016, he was Secretary General
of the French Institute of Solar Energy (INES). Vincent advised and supported the winning Team Rhône Alpes
in the SD (2010 and 2012) and was a senior member of the SDE 2014 organizing committee, stewarding
the communication activities in Versailles. He is currently President of the Energies for the World Foundation and of Observ’ER, the National Observatory of Renewable Energies. He is also Professor at Sciences Po Paris
in Renewable Energy and Energy Transition.
https://www.actu-environnement.com/ae/news/vincent-jacques-le-seigneur-observer-22818.php4

Yves Weinand is an architect and structural engineer and founder of the Bureau d’Etudes Weinand in Liège/Belgium. He is currently working on the Vidy Theater in Lausanne where timber is used as the main structural component. Since 2004 he has been Professor and Head of IBOIS Laboratory for timber constructions at EPFL. Here he directs an interdisciplinary group of architects, engineers, mathematicians and computer scientists who perform research work in the fields of timber rib shells, folded timber plate structures, integral mechanical attachments and assembly processes. Prof. Weinand was a jury member of the Engineering Contest at the Solar Decathlon Europe 2014 in Versailles.  https://people.epfl.ch/yves.weinand

Former SDE Secretariat members Louise Holloway and Peter Russell will serve as observers during the jury session. Louise Holloway is a creative director, educator and brand management expert, advising public organisations, institutions and consumer brands. She was the manager of the Communication and Social Awareness contest for the SDE 2014 and authored the Solar Decathlon Speed Peer Review series, which consolidated the effectiveness and clarity of individual SDE team communication. Louise was chief creative officer for the SDE14 ceremonies; she subsequently served as communications and creative director of the Solar Decathlon Europe Secretariat. Louise is currently Director of the Energy Endeavour Foundation.
https://solardecathlon.eu/louise-holloway_communication-creative-director/
http://www.louiseholloway.eu

Louise is convinced: “The spirit of youth, competition and resource-responsibility
makes the Solar Decathlon so powerful. The SD resonates with us all: from students
and academics, professionals and policymakers to children and the public at large.
It’s a technology showcase and an entrepreneurial platform, championing energy
literacy and workforce advancement. The impact is immense, reaching millions of people
with each event. The Solar Decathlon inspires us all to go out and make great changes
in our world.”

Peter Russell is an architect and academic specialising in computer aided design and construction. He was the Faculty Advisor to RWTH Aachen’s “Counter-Entropy-House” at the SDE 2012 in Madrid. He also served as an observer to the SDE 2014 organisation committee and was technical director on the Speed Peer Review series. From May 2015 to Jan 2017, Peter was Secretary General of the SDE Secretariat. He is currently Dean
of the Faculty of Architecture and the Built Environment at the TU Delft and is a Solar Decathlon Europe Charter Expert. http://www.bk.tudelft.nl/en/about-faculty/dean/

Peter on the Solar Decathlon: “The Solar Decathlon is a unique experience in the higher education landscape. The combination of interdisciplinary challenges, a tight schedule and the constraints of reality creates an unparalleled experience, both for educators
and students. Leading a team to design, build and operate our SDE 2012 entry was one
of the most gratifying moments of my career. The impact of the Solar Decathlon lasts
a lifetime.”

The Energy Endeavour Foundation is honoured to receive the jury members, who eagerly await
the final application submissions, due on Monday March 20th, 2017, at 14h00 CET. Host city applicants are encouraged to give their all during the upcoming days to submit their best applications;
the jury is ready! In the intrepid spirit of the next Solar Decathlon Europe, may the best city win!

knowledge platform
We use cookies on our website to give you the most relevant experience by remembering your preferences and repeat visits. By clicking “Accept All”, you consent to the use of ALL the cookies. However, you may visit "Cookie Settings" to provide a controlled consent.
Cookie SettingsAccept All
Manage consent